Reference-Based Mastering: The Next Step in MDM 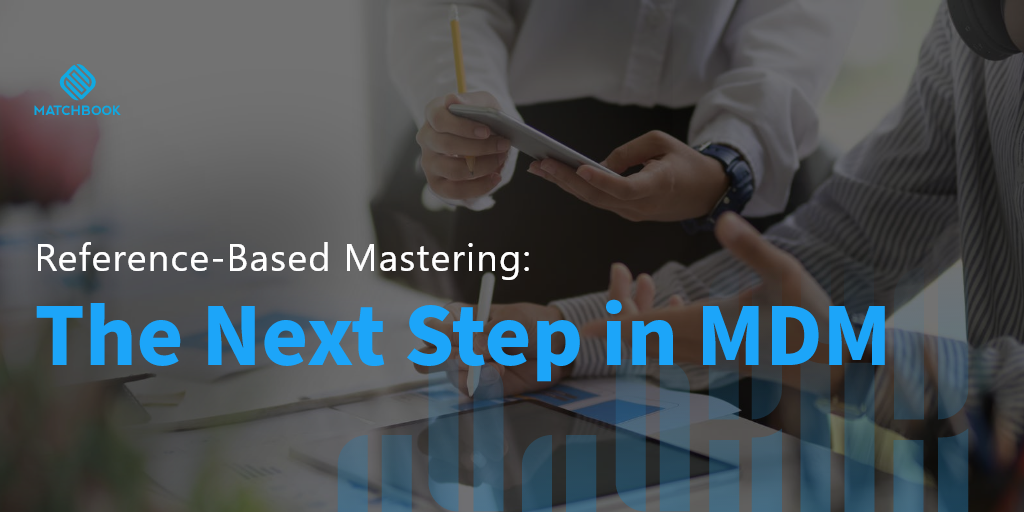 “This is a problem,” said Tom Matthews, as he felt his heart pole vault into his throat. He scanned the first few emails in his inbox, each marked with a glaring red attention flag. They all seemed to be saying the same thing. “This is a big problem.”

Honestly, Tom was used to solving problems. He had a talent for it. He even liked it. It’s what had first earned him notice within the halls of Advanced Solvents, and it’s what had landed him in the chair of the Vice President of Sales.

“Tom, what happened to my contacts in the database?” “Hey Tom, why doesn’t the CRM have this record anymore?” “Tom!!! Where are my customers???”

It seemed as though everyone from the sales team was piling on with email after email. And what strange questions they were asking. How could they not find their contacts? How could a customer’s information simply disappear? Tom sat at his desk and pulled his keyboard closer. Surely this was all some kind of bug in the system. Surely he could find a way to short circuit this problem before it grew out of control.

He clicked and typed his way over to the CRM, and began a search. He was looking for one of his original clients, a refinery just on the other side of Houston from the offices of Advanced Solvents. He searched. And he kept searching.

But not the record he wanted. Not that specific refinery.

The Problem(s) with MDM

It’s a scary thought, isn’t it? Tom’s entire sales department was forced to grind to a halt because their contacts and records — their data — betrayed them. They struggled for hours, then days, to reclaim their databases and refill their CRM.

For some customers, the error in Advanced Solvents’ systems passed without their noticing. For others, though… As the sales team tried to reconstruct their records, leads that had been hot began to rapidly cool, then abruptly ended as the customer chose another distributor.

It’s all too easy to imagine this kind of doomsday scenario, and to picture in your mind’s eye all the business being lost. And for what reason?

Unfortunately, these kinds of scenarios do happen. They happen when an organization, which for years has acquired mountains upon mountains of data, decides to master and enrich that data. Specifically, they happen when the execution of the mastering and enrichment is carried out with a traditional Master Data Management (MDM) solution.

MDM suffers from three major drawbacks: it takes control of the data away from those who use it; it does not understand or account for the intent with which the data is used; and it is a laborious, drawn-out process that can take years.

Centralization and loss of control

The purpose of MDM is to create a “master” record, and the traditional way of doing that is to use centralized control to subject all data to a series of algorithms. This is problematic for two reasons. First, it separates the data’s users from control. Second, it creates inherent problems with complex rules producing false positives.

Separating the users from control makes them feel as though their data has been taken away and thrown into a blackhole. The users have no idea what’s happening in there, and only when the process is finished are they able to access the new master record. From their perspective, the entire procedure might as well be magic. Only, this is magic that doesn’t always work.

The problem with false positives makes that the case. Depending on the complex interaction between all the algorithms and their rules can easily produce a large number of false positives. This means the process will result in a master record that has been too mastered, with some records unnecessarily removed. This increases the chance that the master record will ultimately be useless.

When Advanced Solvents used a traditional MDM process, the centralized algorithms matched and mastered the data ruthlessly and efficiently. However, without input and context from those who gathered and used the data, the procedure produced something ultimately unusable.

For example, take the reason why Tom couldn’t find the record he was searching for. The specific refinery he wanted was Plant 27, owned by Geo Oil, located in Baytown, Texas. Unfortunately, the MDM algorithms also found the record for the next-door facility, Plant 28. When the algorithms compared the records, they found them similar enough to be duplicates, and discarded Plant 27’s entry.

The loss of control and inability to account for intent are the reasons that Tom’s sales department was plunged into utter chaos. A data solution that produces an unusable set of data is itself unusable. Clearly, things must be improved.

Referential Based Mastering: The Next Step in MDM

There’s no room for failure in the world of mastering data. Either it’s done correctly, and renders something usable. Or else, it’s done traditionally, jeopardizing years of hard work — and untold years of the future. That’s why Matchbook set out to create a solution that always works, that is always done correctly.

It’s called Referential Based Mastering (RBM). Where traditional MDMs rip control away from the collectors and users of data, RBM brings those people tightly into the loop. They retain control over their data, rather than surrendering it to centralized governance. They are able to provide context and intent for the data, making it possible for the matching and mastering process to truly detect actual duplicates. Furthermore, these solutions can be provided in a fraction of the time of a traditional MDM.

RBM makes use of reference sources like Dun & Bradstreet to match and master records for accuracy. By enabling data users to inform the process, the system is powerful and flexible. Users can set the rules they wish to use for their data, process it through the solution, and always end up with an accurate set of data.

Users feel empowered by this kind of process, as they shepherd their data through the system. They understand the rules being used in the matching and mastering phases, and, because they helped create those rules, fewer false positives are produced.

In addition, an RBM solution can be accomplished much faster than traditional methods. The various owners of data within a company can prepare both the system and their data appropriately, then feed the data through when they’re ready. Quickly, a record comes back that was formed with the context and understanding provided by that department.

That accuracy, speed, and fidelity are the reasons RBM is a vast improvement over traditional MDMs. When you consider what’s at stake during the mastering, matching, and enriching process, those advantages start to loom large.

Too many organizations struggle to produce useful, accurate data. The sources of data seem endless, and all too often chaos seems to reign. It’s no wonder that many in the past have turned to MDM in a desperate attempt to fix the situation.

Matchbook uses data mastering differently with Referential Based Mastering. Speed, accuracy, and control are the pillars of our solution for mastering data. Using Referential Based Mastering from Matchbook, you and your organization will finally get a handle on those mountains of data. More than that, you’ll be a more agile and efficient business because you’ll be using a foundation built of good information.

Contact us today, and tell us about your organization. We’ll provide you with a plug and play solution to start incrementally mastering your data, while providing you the flexibility to extend the solution to fit your unique business needs. Get started with Matchbook AI.

Any cookies that may not be particularly necessary for the website to function and is used specifically to collect user personal data via analytics, ads, other embedded contents are termed as non-necessary cookies. It is mandatory to procure user consent prior to running these cookies on your website.

We've removed our $1250 onboarding fee just for you!

We've removed our $1250 onboarding fee just for you!